Exposure to potentially toxic plants usually occurs in one of two ways. The first is where small children ingest parts of household plants such as leaves or seeds. Most of these exposures are of minimal toxicity because of the small quantity of material ingested.1 More serious poisonings involve adults who deliberately consume raw plant material or tea made from a plant for mind-altering or medicinal effects.

Plant identification can be very difficult and a digital image of the plant is useful.2 The image can be sent to a poison centre, which should have access to a botanical consultant. Most plant intoxications can be treated with decontamination using activated charcoal within the first 2 hours of ingestion and with supportive measures (see Table 1). Antidotes are only of potential value in the treatment of plants containing cardiac glycosides and those that present with cholinergic and anticholinergic toxidromes.

The authors of this article identified and photographed common toxic weeds, trees and garden plants in and around Pretoria, Gauteng. These plants are common throughout most of South Africa and knowledge of these plants can be useful to staff working in emergency centres. 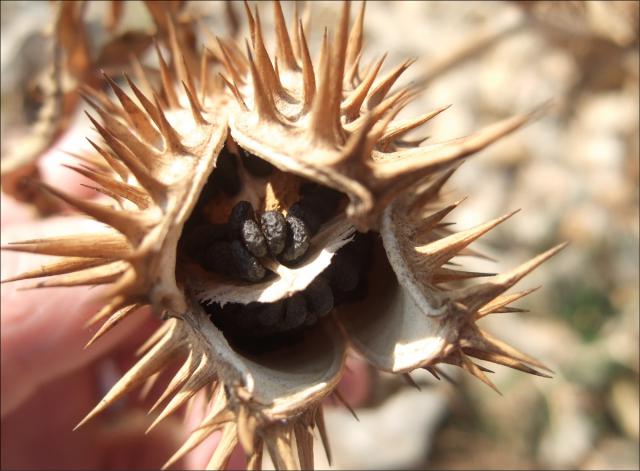 Poisonings occur when the leaves are accidentally collected as wild spinach (marog).3 Severe poisonings also occur when the black seeds, which contain up to 0.2 mg of atropine, are ingested or used to brew a tea (Fig. 2). All parts of the plant are poisonous and contain various amounts of atropine and scopolamine. 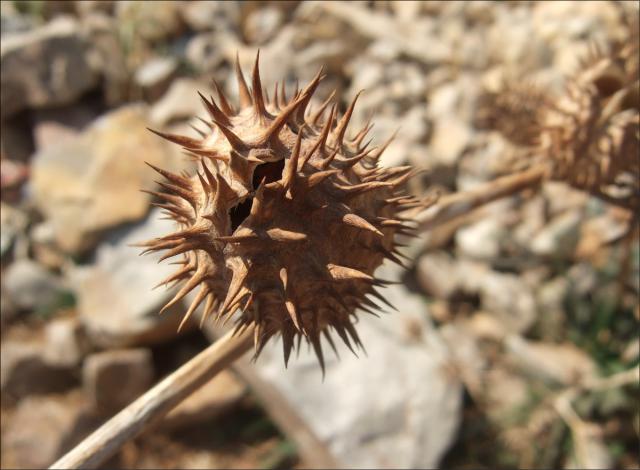 The onset of symptoms usually occurs within 30 - 60 minutes. It may last for days if intoxication is due to ingestion of seeds. The clinical picture includes hallucinations, mumbling speech and agitation. Patients may behave inappropriately and undressing is common. On physical examination, tachycardia, mydriasis, urinary retention, a flushed skin and fever may be present.

Management includes decontamination with activated charcoal (presentation within 2 hours) and placement of an intravenous line for rehydration. Patients can be calmed by administration of a benzodiazepine. Phenothiazines such as haloperidol may have a synergistic effect with the poison and should be avoided.

Physostigmine can be given in a dose of 0.5 - 2 mg in adults and 0.02 mg per kg in children in cases of severe intoxication where central and peripheral signs are present. Seizures, bradycardia, heart block and asystole have been reported with the use of physostigmine and it should be avoided in asthmatic and epileptic patients and in those with cardiac conduction abnormalities.

Also known as castor oil plant, kasterolieboom or Mokhura. This large shrub is common in many parts of South Africa. It is used in the production of castor oil. The spiny seeds grow near the top of the plant (Fig. 3). All parts of the plant are poisonous. The toxic ingredient is ricin. 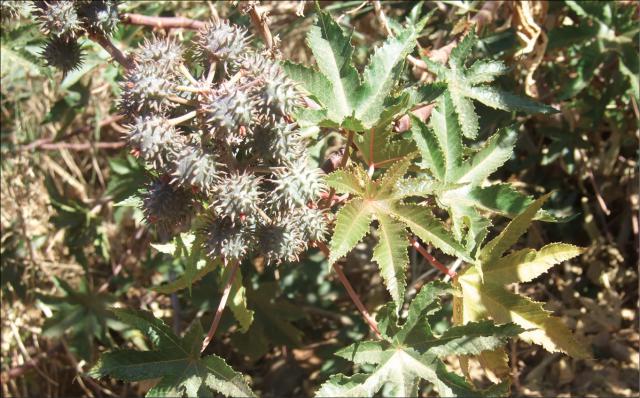 Ricin is a strong cytotoxin that inhibits ribosomal protein synthesis. It reduces net absorption of fluids and electrolytes and stimulates peristalsis. The clinical picture includes a latent period of several hours followed by vomiting and bloody diarrhoea. Dehydration and electrolyte abnormalities can occur. It is also cardio-, hepato- and nephrotoxic. If chewed, 5 - 6 seeds may kill a child and 10 - 20 an adult.4

When the seeds are swallowed intact they tend to pass through the bowel without causing toxicity. However, absorption of ricin may theoretically occur in seeds that were perforated for use as jewellery. Decontamination with activated charcoal and/or whole-bowel irrigation should be considered. Aggressive fluid resuscitation with attention to electrolytes and hydration status is the mainstay of therapy in severe intoxications. Patients should be admitted for treatment and observation.

Also known as oleander or selonsroos. This is a common garden shrub with attractive pink, white or yellow flowers (Fig. 4). It is one of many plants that contain cardiac glycosides. All parts of the plant are toxic. Ingestion of several leaves is unlikely to cause significant symptoms.5 Serious exposures can be due to suicide attempts or the result of misidentification of plants used for herbal products. The clinical picture includes nausea, vomiting, visual disturbances, bradycardia and heart block. In severe cases ventricular fibrillation or asystole may occur. Serum digoxin levels may be elevated but a low or negative result does not rule out poisoning. Treatment includes decontamination, close cardiac monitoring, supportive care and digoxin-specific Fab fragments if it can be obtained. 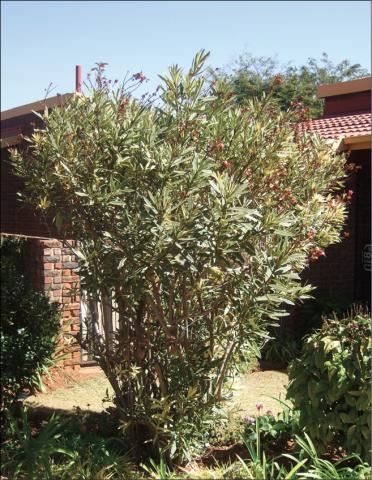 Also known as syringa tree or seringboom. Syringa trees were introduced to South Africa from Asia as ornamental plants, but are now a major problem as invaders of natural vegetation. These medium-to-large trees produce attractive clusters of yellow berries that are poisonous (Figs 5 and 6). Human poisoning in South Africa is common.3 The clinical picture is caused by meliatoxins and may include vomiting, respiratory distress, dilated pupils and seizures. Most cases of intoxication are mild but fatalities have occurred.3 Decontamination, supportive therapy and benzodiazepines to terminate seizures are indicated. 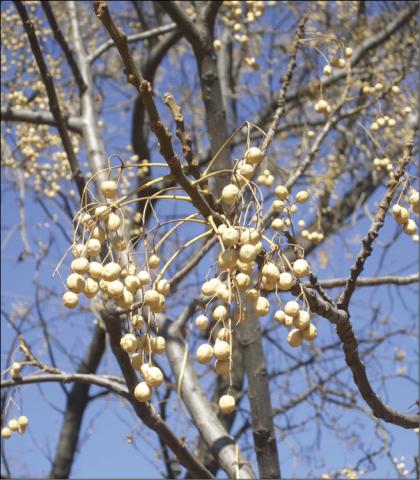 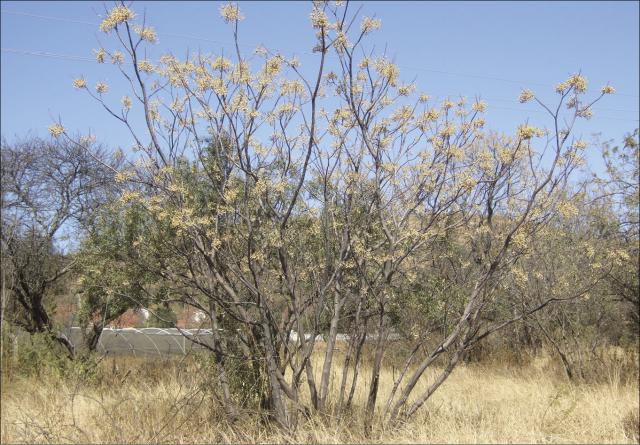 These lily-related, popular exotic ornamental plants are often found indoors and often in pots (Fig. 7). They contain calcium oxalate crystals, which are needle-shaped and cause irritation and inflammation by penetration of the mucous membranes of the mouth, throat and eyes. Most cases are confined to the oropharynx due to rapid onset of burning and irritation. Rare cases of airway compromise have been reported in the literature.6 Treatment is aimed at pain relief and supportive measures. Children can be allowed to eat water-based ice-cream to get symptomatic relief. 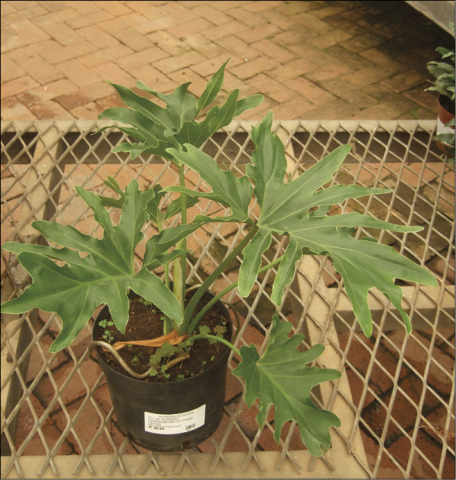