Pulmonary embolism as a cause of sudden death can easily be overlooked.


Pulmonary thrombo-embolic disease can be a cause of sudden death, but the diagnosis is often missed. This review aims to increase awareness towards early diagnosis and treatment of the condition. In addition, a number of new and exciting anticoagulant therapies are being developed for this disease.

Pulmonary thrombo-embolic diseases can be either acute or chronic. Pulmonary embolism (PE) occurs with partial or complete obstruction of the central or peripheral pulmonary arteries by emboli.

PE is the third leading cause of vascular death after myocardial infarction and stroke. It has an incidence of 1:10 000 annually among people <40 years of age, increasing to nearly 1:100 per annum among people ≥80 years. More than 30% occur in patients ≥60 years. In South Africa in 2007, 2 566 deaths, including those due to acute PE, were attributable to diseases involving the pulmonary circulation.1 Three-month mortality rates varied from 5% to 17% in various studies.2

The propagation of a thrombus from the deep venous circulatory system of the legs is the prime cause of most pulmonary emboli. Thrombi can also originate from other blood vessels, e.g. those in the arms, mesentery or neck, but these are very rarely causes of PE. The pathophysiology includes Virchow’s classic triad of stasis, hypercoagulability and vascular endothelial injury. Many patients who have experienced a first episode of deep venous thrombosis (DVT) or PE will have a recurrent event. If untreated, almost a third of deep venous thrombi will embolise to the lungs.

Venous stasis due to bed rest during hospitalisation, trauma, or acute stroke is the most important predisposing factor. Long-haul air travel (flights >4 hours) has also been associated with PE probably caused by venous stasis, but hypercoagulopathies in certain patients may also play a role. Patients with a congenital predisposition to hypercoagulability, e.g. a factor V Leiden mutation, prothrombin gene mutation, protein C deficiency, protein S deficiency, antithrombin III deficiency and plasminogen abnormalities, have been found to have an increased incidence of venous thrombo-embolic episodes. Pregnancy, a hypercoagulable state with increased stasis due to oedema, is also a risk factor for DVT and PE, with a reported incidence of 5 times that in a non-pregnant woman of the same age. Furthermore, oral contraceptive use and post-menopausal hormone replacement therapy are also associated with an increased risk of PE. Tumours predispose to PE because both hypercoagulability and inflammatory processes are often associated with malignancies. Infection with the human immunodeficiency virus (HIV) is an important risk factor in South Africa and in other countries. While it is known that connective tissue disorders such as systemic lupus erythematosus predispose to thrombosis and embolism, acute medical conditions such as pneumonia, asthma or cardiac failure or chronic medical conditions such as chronic obstructive pulmonary disease (COPD), obesity, hypertension and metabolic syndrome have an increased risk of PE. Smoking has also been linked to PE as it is associated with arterial thrombosis. Although some risk factors are temporal and reversible, e.g. long-haul air travel, they may unmask an underlying prothrombotic state such as factor V Leiden mutations.

Clinical features of acute PE include symptoms of sudden chest pain, haemoptysis, dyspnoea, anxiety and syncope. Examination may often be normal, even though tachypnoea, hypoxia and tachycardia are common. Chest crackles may occasionally be heard, and a loud component of the secondary heart sound (P2) and a gallop rhythm S3 or S4 may be present. Massive PE will lead to shock and haemodynamic instability.

2. The chest radiograph is usually normal but may show features such as plate atelectasis, wedge-shaped peripheral opacities (the classic Hampton’s hump occurs over the diaphragm), focal oligaemia (Westermark’s sign), or enlargement of the pulmonary vessels (Palla’s sign is an enlarged right descending pulmonary artery).

3. The quantitative plasma D-dimer, determined by an enzyme-linked immunosorbent assay (ELISA), is usually elevated; negative quantitative D-dimer is a very useful test to exclude PE. Qualitative D-dimers determined with latex agglutination tests are less sensitive. However, the D-dimer can be elevated in a number of other conditions such as pregnancy, malignancy and recent thrombotic events such as stroke and myocardial infarction as well as recent bleeding, e.g. in peptic ulcer disease. Therefore, the D-dimer test is highly sensitive but not very specific. Other biomarkers such as troponin and pro-brain natriuretic peptide (pro-BNP) may also be useful, but elevated levels of these markers are more useful for predicting severity than for diagnosing.

4. Ultrasound using duplex compression Doppler may identify DVTs and is a good screening tool. However, a negative venous Doppler examination does not rule out acute PE as the thrombus may already have propagated proximally. Echocardiography can be used to show evidence of pulmonary hypertension and right ventricular strain if present, but many pulmonary emboli do not display these features. Rarely, proximal pulmonary artery emboli can be visualised on echocardiography.

5. The radionuclide V/Q scan comparing ventilation (V) with perfusion (Q) has been the mainstay of diagnosis for more than 40 years, but interpretation of the scans may be difficult. While a classic V/Q mismatch is diagnostic (Fig.1), it is often not seen. Recent advances in V/Q scanning involve acquiring the images in single photon emission computed tomography (SPECT) mode using 81m krypton gas and Technegas as ventilating agents. This can result in comparable sensitivity but slightly lower specificity compared with CT scans.

6. CT scan pulmonary angiography (CTPA) using modern multi-slice scanners is currently the procedure of choice for diagnosing PE and has replaced most other detection modalities. However, it cannot be used in all cases as critically ill patients may not be able to be transported to the CT scanner as they may be haemodynamically unstable. Exposure to radiation may also be contraindicated, e.g. in pregnancy. Contrast medium may have side-effects in patients with renal impairment or in those with allergy to the medium. Thrombi within the pulmonary vasculature can be directly visualised (Fig. 2).

7. Gadolinium-enhanced magnetic reso­nance pulmonary angiography (MRPA) can also be used to diagnose PE, and has the advantage of being radiation free. However, the scans are often technically inadequate, leading to low overall sensitivity and specificity.

8. Right heart catheterisation with formal angiography still remains the gold standard but is an invasive procedure and not indicated in most cases. 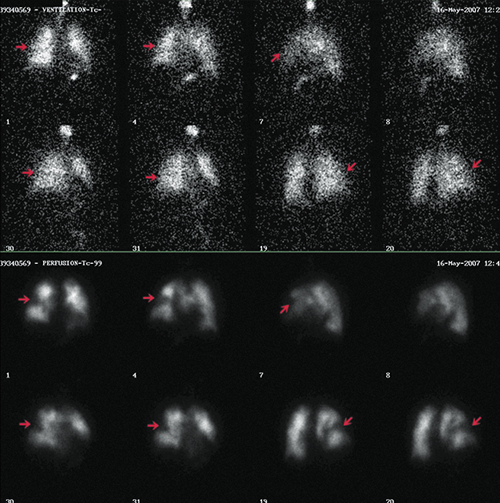 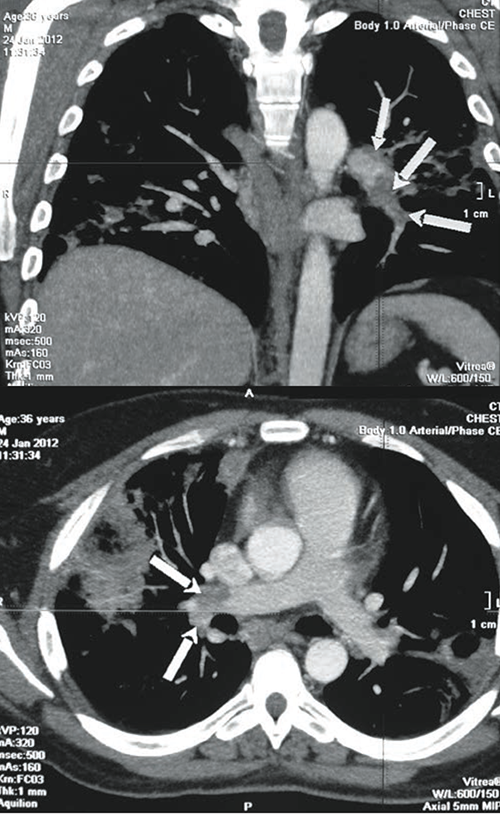 Clinical features are unreliable in the diagnosis of PE, but do help in assessing the probability of this condition. Recent international guidelines recommend that the clinical probability of the disease should be assessed in each patient with suspected PE before any further objective testing is undertaken.3 Two large prospective studies in the 1990s, the PIOPED (Prospective Investigation of PE Diagnosis) and PISA-PED (Prospective Investigative Study of Acute PE Diagnosis), have validated the value of physicians’ estimates of the diagnosis of the condition.4 , 5 A number of scoring systems, such as Wells’ score (Table 1), Geneva score and Pisa score, have been tested prospectively and validated in large-scale clinical trials.6 Based on the scoring system, patients are categorised into low, moderate or high probability for PE. A subsequent algorithm takes the investigation further. The quantitative D-dimer ELISA is usually the next crucial step, which is then followed up by imaging studies. CTPA is currently the imaging study of choice (Fig. 3). 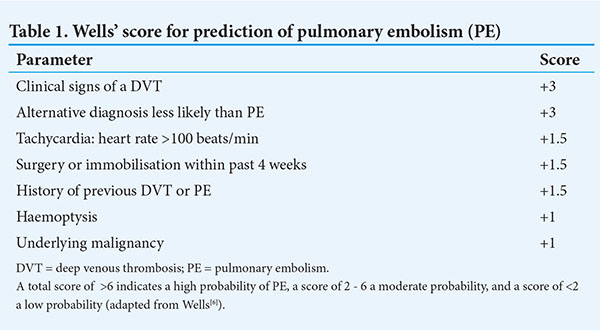 Fig 3. Algorithm for the diagnosis of pulmonary embolism.

Once the diagnosis of PE has been confirmed, the patient needs to receive anticoagulation therapy, keeping the risk/benefits of this approach in mind. The main side-effect of anticoagulation therapy is bleeding and it may therefore be contraindicated in certain situations, e.g. an actively bleeding peptic ulcer or recent intracerebral haemorrhage. Treatment with intravenous or subcutaneous heparin, followed by oral warfarin, is currently the treatment of choice. Anticoagulation prevents additional thrombus formation and permits endogenous fibrinolytic mechanisms to lyse the clot. Heparin should ideally be given intravenously, the aim being to elevate the partial thromboplastin time (PTT) to twice normal. Low-molecular weight heparins (LMWHs), such as enoxaparin, dalteparin and nadroparin, are preferred over heparin in most clinical settings as they can be injected subcutaneously, do not need monitoring and can be administered less frequently. For enoxaparin, the usual dose is 1 mg/kg bd. Warfarin is started soon after heparin, but the timing of the initiation of warfarin is controversial. It may acutely deplete protein C and protein S and therefore theoretically increase coagulability if started before the heparins. In some clinical settings, warfarin is started immediately after the first dose of heparin, but it is usually our practice to start after 2 days of heparin. Warfarin and heparin dosing schedules must overlap until the international normalised ratio (INR) is between 2.0 and 3.0, which usually takes 5 days. The heparin can then be stopped and the patient continued on oral warfarin. The duration of therapy should be at least 3 months, but ideally 6 months if there is a low risk of bleeding. If there is no underlying risk factor (e.g. malignancy or factor V Leiden mutation), treatment can be stopped; however, if there is an underlying risk factor, lifelong therapy is indicated.

Thrombolytic therapy to actively lyse the thrombus is usually indicated for massive PE or in haemodynamically unstable patients. It rapidly reverses right heart failure. Recombinant tissue plasminogen activator (r-TPA), 100 mg, administered as a continuous peripheral infusion over 2 hours, is considered the drug of choice.7 Alternatives would be urokinase, streptokinase and tenecteplase.

Surgical endarterectomy is usually reserved for patients who have chronic pulmonary thrombo-embolic disease, but this procedure can be considered for acute PE if other therapies fail or are contraindicated.

Venacaval filters can also be considered in patients who cannot be anticoagulated or who have recurrent emboli.

Prevention is always better than cure, and prevention of a DVT will lead to a decrease in PE. Subcutaneous heparin, LMWHs, fondaparinux and direct factor Xa inhibitors have all been approved for the prophylaxis of DVT, particularly in hospitalised patients and others at high risk. The American College of Chest Physicians published their comprehensive updated guideline in 2012 and the South African guidelines were published in 2009 and updated in 2013.7 , 8 Compressive stockings, particularly pneumatic stockings, can be used as an alternative to anticoagulation therapy in patients with a high risk of bleeding.

Following acute PE, the patient’s symptoms can resolve on treatment or they may progress to chronic thrombo-embolic pulmonary hypertension (CTEPH). The latter is defined as a mean pulmonary artery pressure >25 mmHg persisting for 6 months after the diagnosis of PE. Patients with CTEPH will have persistent occlusion of pulmonary arteries in spite of anticoagulation or thrombolytic therapy and have symptoms of dyspnoea. The elevated pulmonary artery pressures lead to right heart failure if untreated. The treatment of choice is surgical endarterectomy, which resolves symptoms in the majority of patients. However, a third of patients are inoperable, possibly owing to an arteriopathy, and their prognosis is usually poor. Pulmonary vasodilators may help to decrease pulmonary artery pressures and symptoms but to date none has been shown to be effective in randomised trials.9

The diagnosis of PE is often missed and a high clinical index of suspicion must be maintained. Well-validated tools for diagnosis and treatment are available. Exciting new therapeutic interventions are already in use and continue to be validated in trials.

• There needs to be a high index of suspicion for PE in patients presenting with chest pain, dyspnoea and haemodynamic instability.

• Patients need to be clinically stratified as being at low, moderate or high risk for PE.

• The D-dimer assay needs to be done to rule out PE in low- or moderate-risk patients.

• CTPA is currently the diagnostic modality of choice for the diagnosis of PE.

• Initial treatment with LMWHs followed by warfarin is the current standard of treatment.

• New oral anticoagulant therapy with factor Xa and direct thrombin inhibitors has been validated in trials and is available as alternative therapy.

• CTEPH may be a sequel of acute PE and therapy needs to be considered.

• Prevention of DVT with appropriate prophylaxis will decrease the incidence of PE.