The use of nuclear medicine in childhood


This article briefly discusses some of the more common nuclear medicine investigations available for use in the paediatric population.

In neonates with hypothyroidism detected on neonatal screening and confirmed by subsequent testing, a radionuclide thyroid scan should be performed as soon as possible. It must be undertaken in all nuclear medicine departments as a matter of urgency. Any delay in treatment should be avoided. Thyroid replacement therapy can interfere with the uptake of Tc-99m pertechnetate and therefore should be started as soon as the scan is completed.

The radionuclide thyroid scan provides information on the probable cause of the hypothyroidism. The absence of Tc-99m pertechnetate uptake in the expected position or in an ectopic site usually confirms agenesis. In thyroid glands with an abnormal embryological descent the volume of thyroid tissue is usually smaller than normal, with poor function (Fig. 1). Increased pertechnetate uptake is rarely seen in the gland, in keeping with dyshormonogenesis, which has a higher hereditary incidence.1

Fig. 1. An example of a poorly functioning lingual thyroid.

The current working definition of renal obstruction is any impairment of renal outflow that, left untreated, would lead to a loss of renal function or would prevent the normal maturation of renal function.4 Using renographic criteria, obstruction can only be diagnosed if the patient has a decrease in DRF of more that 10% on the affected side on serial studies. A decrease of more than 5% in DRF should be considered as a warning sign and the interval of follow-up studies, e.g. renal ultrasound and renograms, should be shortened. Cases of bilateral hydronephrosis are more complicated and are not discussed in full in this article.

In cases of a decrease in renal function most of the function will recover with prompt surgical intervention.3

It is tempting to interpret the drainage as shown on renogram curves, but this is not reproducible. If drainage is normal, the patient is unlikely to develop obstructive uropathy. There are numerous causes for poor drainage on a renogram; using this as a criterion for interpreting obstruction may lead to unnecessary surgical intervention with associated complications.

This is a relatively non-invasive way of detecting vesico-ureteric reflux (VUR) in children who are potty trained. On a renogram, most of the activity clears from the kidneys and is found in the bladder at the end of the study. Therefore, without inserting a catheter, there is contrast medium in the bladder. The child then simply voids in front of the camera and the presence or absence of significant reflux can be confirmed (Fig. 2). 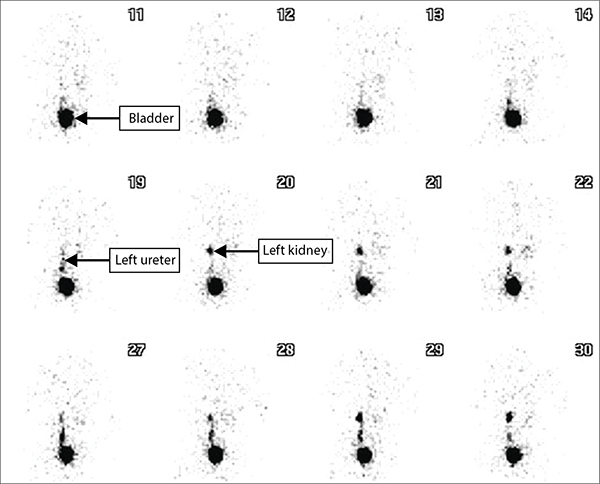 Fig. 2. Posterior images of an indirect cystogram showing reflux of a large volume into the left kidney.

An advantage is that the renogram provides information on renal function and the presence of renal scars, in addition to being a non-invasive way of detecting reflux.

In recent years, there has been a move towards decreasing the number of investigations in children with UTI.5 When faced with a child with UTI, those with a normal urinary tract are investigated far more conservatively than those with abnormalities of the kidneys, ureters or bladder. However, further imaging may be indicated in children with recurrent or atypical UTI.

In children with possible gastro-oesophageal reflux disease, milk scans are an elegant physiological way of investigating the problem. This is a four-part study.

Part one: While sitting on the mother’s lap in front of the camera, the child drinks a small amount of his usual feed with a small amount of tasteless radiopharmaceutical added to it. The transit of activity through the oesophagus is then evaluated.

Parts two and three: Once the child has completed the entire feed, he is placed supine on the camera and an image is recorded to establish whether there was aspiration during swallowing. This is followed immediately by a reflux search conducted for 30 minutes - 1 hour, depending on the institutional protocol. Using this method of investigation, reflux disease can be evaluated according to the frequency, volume, height and duration of refluxes.

Part four: Images are recorded at the end of the reflux study and again 2 hours after the feed as a screening test to assess gastric emptying and to check for aspiration that could have occurred owing to reflux.

In children older than 6 weeks, bone scans are extremely useful in determining the site(s) of osteomyelitis and septic arthritis.

Children with prolonged neonatal hepatitis should be investigated urgently, as the outcome of a Kasai procedure for biliary atresia is poorer in older babies.7 In patients with jaundice, the radiopharmaceutical of choice is Tc-99m mebrofenin. If activity is seen passing from the biliary tree into the gut, biliary atresia can be ruled out. However, the absence of excretion does not confirm the diagnosis of biliary atresia but prompts further, more invasive, investigations.

The combination of information on areas of increased metabolic activity with anatomical localisation makes F-18 FDG-PET/CT an excellent tool for investigating fever of unknown origin.

This is a very short, selective summary of how nuclear medicine can contribute to the field of child health. Studies specific to more specialised areas, such as oncology of paediatrics, have not been addressed in this article.

Acknowledgement. I would like to thank Professor Mike Mann for critical feedback with regard to this brief overview.